Pendeluhr mit Mondphase und Schlagwerk. Topzustand!
Entworfen und gebaut von Nathaniel Brown in Manchester (UK). Aufwändig hergestellter Uhrenkasten. Pyramiden-Mahagoni furniert und massiv verarbeitet. Folgende Informationen zu diesem Uhrmacher haben wir von clockswatches.com erhalten: Nathaniel Brown is listed as a clock and watch maker working in Manchester from about 1770 to about 1800. It is recorded that a longcase clock by this maker was illustrated in the book ‘English Domestic Clocks’ by Cescinsky and Webster, published in 1914. Other sources add that Nathaniel was working in Manchester from about 1750 to 1775 and several Lancashire museums have examples of his work as he was known to have been a prolific maker of high quality eight day clocks. In 1776 he took on responsibility for maintaining the clock of St. John’s church which he only gave up in 1799, the year before his death. He is known to has worked in several different addresses in Manchester, at 5 Cannon Gate until 1788, 30 Cannon Gate until 1797, then also 20 New York Street in the at same year and then 3 St. James in 1800. His dearth was announced on 31st August 1800 in the Manchester Mercury which said “died Sunday – Mr. Nath. Brown, a much respected clock and watchmaker of this town. His loss will be sincerely regretted by his wife and family and all within the circle of his friends and acquaintances, having been a well known inhabitant householder (eminent in the line of his profession) in Manchester for upwards of fifty years” 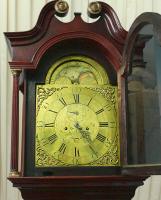 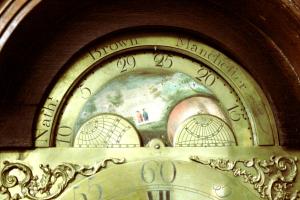